I Don’t Have Time to Fix My (Aggressive?) Puppy 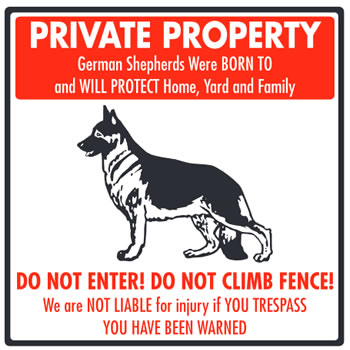 I wanted to share an experience we had here not too long ago. I was outside one day and my backyard neighbor called me over to our fence. He wanted me to know that while I was sleeping the day before, the kids who live across the yards were outside playing kick ball. One of the kids has a pretty darn good kicker because he managed to kick the ball into our yard which you’ll just have to trust me on this, is one heck of a kick! His brother decided to go get the ball which meant he had to climb our fence to get it. Our neighbor happened to catch the boy scaling the fence and very quickly and sternly told this boy in no uncertain terms that for his own safety he should never climb this fence.

Our fence is a chain link fence about 6 feet tall with really sharp chain link points on the top. We saved money on the fencing by purchasing it second hand and it doesn’t have the “finished” top on it like most chain link fences do. My eyeballs about popped out of my head when my neighbor told me this. Visions of me not seeing this kid in our yard retrieving his ball and me unknowingly letting the dogs out was a pretty scary picture. It would be so easy for me to do this because I can’t see all corners of our yard unless I physically go outside. I also pretty much assume that our fence means nobody would be in our yard. I don’t know how this kid managed to get over our fence without hurting himself!

A Fence Always has a Reason and a Purpose

There are probably as many reasons that yards have fences as there are fences. Our reason is to keep our dogs safely in our yard without having to tie them up. On the flip side, it also keeps people from just aimlessly wandering into our yard and kids from “cutting through” as we used to call it when I was a kid. The point here is that no matter what the reason a yard is fenced, it more than likely means KEEP OUT unless you’ve been invited in. Yeah, and there’s usually a gate that serves this purpose well.

We weren’t angry this youngster climbed our fence, we were concerned because he could have been seriously hurt! Being a German Shepherd, our Riley is very protective of his home, his family, my SUV and his yard. In his mind, these things all belong to him and like many dogs (GSD or not) he’s made it his job to make sure the bad guys do us no harm. Understand, we do not have a vicious dog, we have a protective dog and there is a big difference.

A few days later, I went over and had a friendly but very concerned chat with the boy’s step-mom and pretty much begged her to teach all their children to never ever climb a fence into anyone’s yard. She got it right away and said she’d have a talk with all the children.

When I relayed this story to my boss a few days later he strongly suggested as an added layer of protection, that I should post our yard with Beware of Dog signs. He mentioned homeowner insurance companies recommend this to people who have dogs. The theory being that should anything ever happen, at least the homeowner has taken precautions to keep people safe which should it ever come to someone having to go to court would likely work in the homeowner’s favor.

Ok, so to me the standard Beware of Dog sign (which usually has an image of a huge crazy eyed, open mouthed, drooling, slobbering dog with teeth big enough to belong to a Tyrannosaurus Rex!) means the dog on the other side of the fence is vicious and like I said, our dogs are not nor do I want to give people the idea that they are. However, the fact that Riley is so protective and that should I have happened to let the dogs out not knowing this kid was in our yard could have also kicked in the pack mentality meaning our two girls (who’ve never given us the idea they’d ever bite) might just have taken Riley’s lead and this kid would have had 220 pounds of protective German Shepherd to deal with! Oh yeah, this could be bad.

So, in order to post our yard with meaningful but non-typical Beware of Dog signs, I went custom sign hunting and found the Signs with an Attitude company. I promptly ordered two custom-made Beware of Dog signs but printed with my own words, one of which you’re looking at a mini-version of on this page. I plan to order a couple more but I first have to compose what I want them to say. We plan to put two more out back on the other corners of our fence and one on the gate to our deck in the front. The decal sign on our door isn’t big enough for anyone to read from a distance and is there more for our own entertainment than anything. It says “German Shepherd Security Services … We Don’t Call 911” I get a case of the giggles whenever I read it.  I’ve got a t-shirt with the same thing on it as well.

I hope this experience will make you all think about taking precautions for your own dogs and yard. No, don’t just think about it, please do something constructive to help prevent a bad thing from happening. Dogs will do what dogs will do and even if your dog has never given you cause to think they’d ever bite someone, they’re still dogs and you never ever know what might happen some day that would make a normally non-biting dog bite. Most dogs feel it’s their job to protect their homes and families and dogs perceive things differently than humans. What makes no sense to a human makes perfect sense to a dog and vice-versa. Don’t make your dog pay the price of being a dog and doing what dogs do if the situation ever arose. There isn’t a soul or a dog out there that’s 100% immune to that one moment of totally unexpected craziness that can happen to anyone.