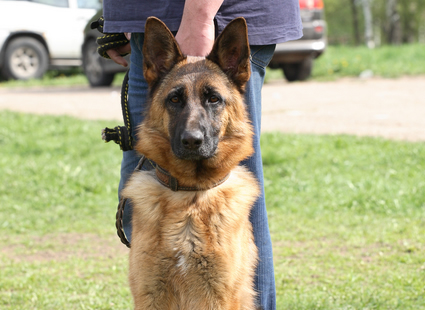 I’m absolutely furious! I watched a news video from June of this year about a man who leashed up his five year old female German Shepherd and shot her in the neck. After he shot her, he put her in a kennel to die. Why? Simply because she relieved herself in the house! There is absolutely no excuse, good reason nor justification for being cruel to any animal in any way, shape or form. None whatsoever.

Nobody wants this kind of a mess in the house but it happens. If you have a pet, you should expect they’re going to have an occasional accident. If this is absolutely unacceptable to you, then don’t have a pet! It’s as simple as that. Cat’s have litter boxes, dogs don’t. Some people expect their dogs should be able to “hold it” for their entire work day and then some. If I could run home and let my dogs out halfway through my shift every day, you can bet I would. It’s inhumane to expect a dog to hold it for any longer than eight hours and never have an accident and even that in my opinion, is pushing the envelope. Can you comfortably hold it that long? Making a dog wait long periods of time to relieve themselves is very possibly one reason they wind up with urinary tract infections of one kind or another — just like humans.

Just like humans, dogs get sick sometimes. When you have to vomit or relieve yourself, you have the luxury of immediately heading for the nearest bathroom. Do humans always get there in time? No. We too, have an occasional accident but nobody shoots us for it. Heck, nobody even punishes us for it or if someone does, they shouldn’t. Relieving oneself is a normal bodily function that sometimes malfunctions.

He Had Time to Stop Himself

As a dog owner, I don’t always wait until my dogs tell me they need to go outside. I offer them the opportunity several times a day, especially when it’s nice out so they can take in a little of the day outside of the house. They sometimes like to lay out in the yard watching the world go by. I really don’t have much doubt that this poor dog did indicate she needed to go outside and the owner probably ignored her request(s).

My guess is this isn’t the first time she was reprimanded for doing something her owner didn’t like and that her abuse started out small and escalated to the point that the owner picked up a gun, tied her up, took aim and pulled the trigger. Do you see how many steps it took to accomplish this “obedience training” and how many opportunities this monster of an owner had to stop before he shot her?

This poor dog didn’t have any idea whatsoever why she was shot. She doesn’t have the logical ability to put together the thought string of “I messed in the house, therefore I was shot.” This is a lesson she cannot possibly expect to learn. So, what did he teach this dog? Absolutely nothing.  What did he prove? That he’s a big strong man who has the gall to tie an innocent dog up and shoot it? Oh now that takes just so much macho I want to puke. Who did he prove this to? Far as I’m concerned — only to himself.

Anyone who defends this sick excuse for a human being is just as sick as he is. A dog should not be shot for anything it does. Whether humans understand or not, there are dog-logical reasons for everything a dog does or doesn’t do. You would do both the human and the dog population a wonderful turn and be a better dog owner if you took the time to learn more about dog behavior. You’d probably also be amazed at some of the things you learn.