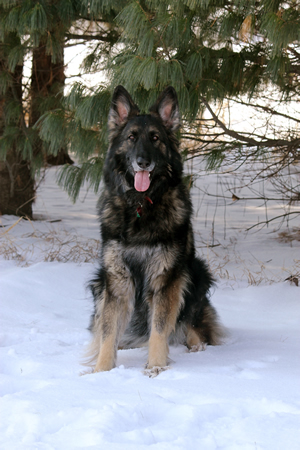 Hi everyone, I’m Nissa. I’m a long coated sable colored German Shepherd (so my fur is even softer than Rileys!). My face is very black and so it’s sometimes hard to see how pretty I am in pictures. I was one of ten puppies born on April 17, 2007 so I had lots of brothers and sisters to play with. This is the story of me and of how I came to live here when I was three months old.

It was pretty scary to be taken away from my Mom & Dad and brothers & sisters. It was a long ride home and I got sick which wasn’t any fun at all. I thought I was gonna be in big trouble, but nobody seemed to be mad. Mom said I got sick because the breeder fed me before the car ride and he really shouldn’t have done that so she wasn’t mad at all that I’d gotten sick in the car.

When we got home Mom and Dad took me into the back yard to meet Riley. Oh boy was that ever scary! He was really big compared to me and my brothers and sisters. He ran right over and started sniffing me. I was so scared! I was shaking and looking for a place to hide! I started running to get away from him, but I guess Riley thought I was playing and so he started chasing me. I heard him say “Hey Mom! Thanks for the new toy!” Ugh! Toy indeed!

After running away from Riley for awhile trying to find safe places to hide (he’s very persistent!) I learned that even though he was a little rough around the edges (I think I still have a few permanent holes in my butt where he nipped me), he was really just playing. He did tell later me that he was sorry, and that he was just so happy to have a furry friend to play with he kind of got over-excited. We’re the best of friends now :)

At First MOM DIDN’T WANT ME!

To back up a little bit, I’ve heard Mom say that she really didn’t want me at first. That REALLY hurt my feelings until she explained that it wasn’t me personally she didn’t want, it was that she didn’t want a PUPPY. She wanted a dog more Riley’s age and she wanted another rescue dog because so many of them need homes. Mom looked and looked for about two months and there just wasn’t another rescue dog that was a good match for Riley. Dad kept pushing to get a puppy and Mom told him no puppies! But they were really getting worried about Riley. You see they had fostered two shepherds that Riley got really attached to and then they went to their Forever Homes and Mom told me that Riley was very sad and depressed. He just layed around groaning and sighing sometimes. Mom said she cried just watching him when he was like that. As much as Mom knows that Riley loves her very much, she also knows that every dog needs a best furry friend and she wanted Riley to have one, too. So you see, even though two months is not very long to be looking for a dog – it’s a very long time when you are sad.

Riley told me that one night he and Mom were on the computer AGAIN trying to find him a rescue friend and it just wasn’t happening. It was a Saturday night about the time the Sunday newspapers come out and that this little voice told her to look on the newspaper web site. (It’s kind of un-nerving to know that Mom hears voices but I think she’s really ok.) She said this one newspaper ad jumped out at her (that had to be pretty scary!) because they had long-haired shepherd puppies advertised. She wanted to call this guy at 2 o’clock in the morning, but Riley talked her into waiting until 8. Mom said it was a very long night for her. When it was time she called the phone number and found out that me, one sister and two brothers were needing a home. They came to meet us later on that day and even though I kept trying to wiggle away from him to go play, Dad picked me.

But … I was SOOOOO CUTE!

As pretty as I am, I could tell that Mom wasn’t to thrilled with the whole idea. She said I was really cute but that puppies chew and mess in the house which is why she didn’t want a puppy. I don’t know how somebody can NOT want a cute cuddly puppy like me, but that’s the way things started out. I wasn’t so sure I wanted to go home with them either so I guess we had that in common with one another.

They couldn’t take me home with them that day because Riley was going to be “fixed” (whatever that is?) the next day and he needed a week to rest afterwards and so they asked Sal to put a little spot of nail polish on my tail because they wanted to be sure when they came back that it was me they took home and not my sister. I had to run around for a week with pink nail polish on my tail! Ugh!

When Mom and Dad came back to take me home, Mom freaked out. I was more than twice the size I was when they first met me! I grew really really fast that week I guess. My biological Dad is 130 pounds and Mom is about a 100 pounds so I don’t know where they got the idea that I would stay small ;) I guess they just thought me getting bigger wouldn’t happen quite so fast.

I never thought I could be as good at getting what I want from Mom as Riley is but Mom says I am. They probably don’t know that he taught me all his little tricks for getting what us dogs want from humans ;)

But I CHANGED MOM’S MIND For Her

We all managed to get through the puppy stage and now Mom is just as nuts about me as she is about Riley. Mom tells me that she is very happy she decided to consider getting a puppy and that now that she knows me so good, she wouldn’t want things any other way. We figure there was a reason that she couldn’t find a rescue dog for Riley and wound up with me instead. Nobody knows what the reason is, but we figure that’s pretty much what happened. It was the same story when they were looking for Riley. They had some nasty setbacks and disappointments along the way but all those things took them to Riley. So now Mom says she’s got two miracles. I don’t know what a miracle is, but it seems to be a good thing ;-)

I’m pretty much of a spectator sport dog, I don’t get into chasing the ball like Riley does. He looks pretty silly a guy as big as he is chasing around after this little tennis ball. I’m more dignified than that and would rather just watch. I have better things to do with my time. I found this really cool map that shows how you can get to China from our back yard and I’m bound and determined to get there because I heard China is a neat place to visit.

Mom says they should have named me “Digger.” Something about how I keep trying to get to this place called China from our back yard. Now that I’m older, she keeps telling Dad that they should have named me “Gabby” cuz I’m always “talking” to other dogs when I’m in the back yard. Mom says I bark at other dogs who could be miles away and that sometimes she thinks I just bark at the wind cuz I like to hear myself talk. Shhhhh! Don’t tell her … but I still like counter-surfing, too!