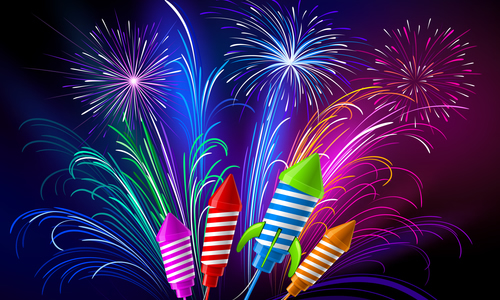 Here we go again, tonight was the first night of fireworks season in our neighborhood. Fireworks “season?” Yes. You see, the people in our city don’t care that it’s not yet the 4th of July, they start setting off the noise rockets a week or two before the actual holiday and continue to do so several weeks afterwards. They don’t care that they’re disturbing the neighbors, waking them up, giving them headaches, generally annoying them and more importantly — forcing pets all over the area into anxiety or panic attacks. Have you ever seen a dog suffering from a panic attack or thunder-phobia? I don’t have cats so can only comment on dogs but I suspect cats and even wildlife are affected in the same way. I can tell you from first-hand experience it’s not pretty. Those of us who hold a true love of animals in our hearts feel so helpless and find it absolutely heartbreaking to witness.

Back in 2011 I wrote my first article on the effects of fireworks on dogs called Fireworks & Dogs – Her Fear is Our Heartache. It’s the true story of how humans caused Nissa’s fear of fireworks and thunderstorms. I won’t repeat the background history but I urge you to read it. It’s now 2013 and things haven’t changed any. Tonight I was awakened by Nissa jumping up on one side of the bed and Riley bumping the bed hard on the other side with his nose to wake me up. My dogs don’t wake me up for anything but thunderstorms, fireworks or really having to go outside to pee. Knowing that my husband would have let them out within the past 3 hours or so before he left for work I knew this wasn’t the issue. As I walked downstairs my thoughts were that a thunderstorm must approaching and that unfortunately, it was too late to do anything to help Nissa get through it. Once the panic sets in, it’s impossible to calm her. I also knew that going back to sleep wasn’t an option — there is no sleeping during thunderstorms or fireworks.

Riley went outside no problem, but Nissa in her panicked state wasn’t having anything to do with outside. I grabbed my tablet and checked the weather radar and my Weatherbug app — no storms whatsoever until you hit Iowa. It was then that I had no doubt that fireworks season was officially in gear. A moment later I heard the booms and the dread and anger set in. Some selfish idiot a few blocks over was setting off fireworks. I don’t show these emotions to my dogs because I know this will only make things worse for them.

I tried without any luck to get Nissa to take what we call her “thunder pills” which are at least the 20th different calming aid I’ve tried over the past three years to help her through these times. Since 2010 when this all started, I’ve spent hundreds upon hundreds of dollars on quite an assortment of calming aids including the Thundershirt. My latest attempt is a chew called ***Pet Naturals Calming. If I can get them into her before the noise starts they don’t cure her but they do have a noticeable effect. They at least help to relieve her of the heavy panting and slow down her pacing to some degree.

The package dosage is 1 to 2 chews a day but the package says you can safely double or triple the dose during times of high stress. I have to give her at least 5 to see any results. Unfortunately, we had a week full of thunderstorms and I’d used up the supply I had on hand and am waiting for my next order. Where’s the Post Office when you need them? I tried giving her the other most recent chew I’d tried that aren’t as helpful, but in desperation something seemed better than nothing at all.

*** Chew Warning: I want to be sure to pass along that I called the Pet Naturals company to ask how often I could give her these chews and was told to ask my vet which I promptly did, thank goodness. This product contains thiamine which can be toxic to dogs if you give them too much meaning dogs can overdose on them! Do not increase the dose or give multiple doses without checking with your own vet first! Your dog’s weight and any other medications or health conditions they may have must be taken into consideration of your own dog’s safe dosage level and how often you can administer the chews!

Blowing off Fireworks is a Form of Animal Cruelty

The straw that broke the camel’s back and made me decide to vent (again!) about people and their damn fireworks is that I found that Nissa’s fear had caused her to pee on the bathroom floor. She’s very well house-broken but she’s also terrified to go outside during these times. I don’t care that she peed on the floor, it wipes up. What I do care about is that it didn’t have to happen. Fear is what caused her to pee on the floor and the bottom line is that — people are what caused her fear! In our minds, our dog like so many others, is the victim of a form of animal cruelty. A stretch you might say? I don’t think so. When people do anything that causes an animal fear it falls into the animal cruelty category.

Did You Try Medication from the Vet?

Some of you may ask why I don’t simply sedate her with medication from our vet. When this was first suggested to me three years go, I called my vet’s office and was told she’d leave some medication at the counter for me. I immediately made the 30 or so mile round trip and brought it home. Once home I’m reading the label and suddenly a very uncomfortable feeling came over me and my “Mommy voice” begins nagging at me so I went on a research binge and found that vets often prescribe something called Acepromazine or “Ace” for short. After reading a bit my eyes widened as I reread the label and found that this is exactly what was in the bottle I was holding in my hand. I immediately tossed the bottle of pills in the trash. I don’t even want this in my house and I’m sure not going to give it to my dogs! If you want to know why I won’t give Ace to my dogs you’ll find the answer in my article: Why I Won’t Give My Dogs Acepromazine AKA “Ace” for Thunder-Phobia or Fireworks If your vet suggests it, prescribes it or you’re already giving to your own dog, please read the article!

I Won’t EVER Get Over My Anger

Our fireworks experience of 2010 resulted in Nissa not only being freaked out by fireworks, but the very first thunderstorm after that we found she suffered the same terrified reaction to thunderstorms and it hasn’t subsided one bit. It’s been three years and there has been absolutely no change in her reaction to either of these things nor has there been any change in my anger towards the selfish idiots who caused this to happen. Every time there’s a thunderstorm we go through the same thing and every June brings with it the beginning of fireworks season. I continue to seek out products that will help her as much as possible but in the back of my mind I’m fairly certain we’ll be dealing with this until the day she passes away. She’s six now, so there’s still a lot of years and a lot of terror for a dog and its family to have to deal with.

Every time it storms, every time I hear or see fireworks, every minute I spend looking for something new to try, every dime I spend on a calming product and at the very top of the list is: every time I watch my little girl suffer, it brings back the memory and all the anger of when this began and what caused it. I should not have to spend money nor my time looking for things that will help my dog cope with what you did to her. Before the fireworks of 2010 she was not bothered by thunderstorms or fireworks and the only reason she is now is because of what those uncaring selfish kids did three years ago. If I thought it would do any good I would find all six or eight of them and drag them to my house to witness what she goes through. Unfortunately, that isn’t going to help Nissa and my guess is that they wouldn’t care anyway.

So, damn all of you who think it’s fun to set off fireworks. You’ve caused incurable emotional damage to an innocent creature and not only forced us to spend a ridiculous amount of money trying to help her, but you’ve taken the joy of fireworks from us along with our previous love of a good thunderstorm.