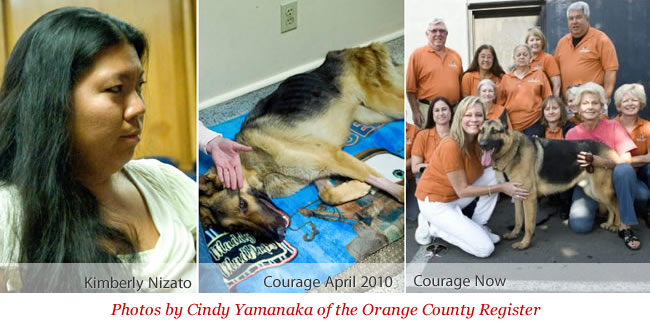 It’s been over a year since Courage, the nearly starved to death German Shepherd in Orange County, California was found and rescued. There was delay after delay in the court proceedings and charges against the person Courage was supposed to be able to trust the most — and who let him down to the point he nearly died. Courage’s now previous owner, Kimberly Nizato received just 30 days in jail (with two days suspended so just 28 days jail time) three years of probation and court ordered to pay restitution in the amount of just $2,034.00 plus court costs. I don’t see how this is justice for Courage.

I can see how hiring a smooth talking lawyer adept at securing delays and schmoozing judges and juries would bring about this kind of result. That’s what lawyers do — everything they can to get even the most guilty people off with the lightest sentence they can possibly wrangle. I don’t see how this is justice for Courage.

I can see how all these ridiculous and probably skillfully planned delays contributed to the memories of Courage’s pain and suffering to fade in people’s minds so that when the sentence finally came down, it wouldn’t seem like such an outrage. I’m convinced Kimberly’s lawyer delayed this until he felt that there would be no protesting outside the courthouse or people screaming their rage when this day finally came. His comment about this being “a crime of omission not commission” — and your point would be? This is just slick pathetic lawyer talk. what difference does it make? Since when is ignorance (if that’s what he really meant?) an acceptable excuse for doing what she did? Omission is just a fancy word for neglect. If her child had been found in this condition, would they excuse it as an  “Oops! She just forgot to feed the child?” I don’t see how this leniency and double-talk is justice for Courage.

I don’t see how just over $2,000 can begin to repay the time, the bills and more to the point — the heartache the members of the German Shepherd Rescue of Orange County endured while nursing him back to health. It was originally thought his vet care would be more than double the restitution amount and it would not surprise me if the actual cost was considerably more. I know that there were thousands of dollars contributed by generous people who donated money to the fund. The outpouring of contributions was so great that the people at GSROC finally asked that the incoming donations to be redirected to other needy German Shepherds because they’d reached and even surpassed their goal. With what they’d collected Courage would receive the best of care. I know because we were one of these contributors and we were happy to contribute every penny.

Has Your Memory Faded?

For those of you who never read or perhaps did and don’t remember the horrific details, perhaps you should re-read the beginning of Courage’s story. An adult German Shepherd should not weigh anywhere near 37 pounds, but Courage did the day he was found tied to a tree and left to die in Kimberly Nizato’s back yard. Had it not been for the people walking by this yard and seeing Courage — according to the vet who cared for him — he probably would not have survived another day. Did you know that these people thought he was dead when they first laid eyes on him? Did you know he screamed in pain the entire trip as his rescuer raced him to the vet’s office? Did you know the vet’s first thought was that he didn’t have any idea how Courage would make it but would be the one to go on and give everything he could to save Courage’s life?

Medical testing showed that Courage was found to have eaten rocks and dirt in his attempts to keep himself alive. It was later learned he’d been stuffed in a small airline crate and shoved into Nizato’s garage. To my knowledge nobody knows how long he was kept in this plastic crate with no food, no water and no one to love him. Nizato took Courage into her home when he was just a pup — he was three years old when he was found. How long had this dog endured the pain of neglect at the hands of someone who was supposed to love and care for him? How many meals did Nizato’s family eat inside the comfort of their home while Courage — banned to the garage — ate and drank nothing? Have you ever thought how much your stomach would hurt from the pain of starvation after even just a few days? What crime could this dog have possibly committed that would cause Nizato to do this to him? I can’t think of a single thing any dog could possibly do to make him deserve this kind of neglect and suffering.

Why Didn’t They Force Her to Tell the Court?

According to the Orange County Register, the newspaper that followed and reported on this story since Day 1 — Deputy District Attorney Jennifer Bainbridge said that the reason why Nizato let Courage go so long without food and water will remain a mystery. Why was Nizato not made to answer this question? Why was she excused from answering to the court and to all the people who cried for Courage?  Maybe because there isn’t a reason in the world that would justify what she did? Maybe because no matter what reason she gave, she’d only anger people all over again? I can’t help but think that by not forcing her to answer, the courts are allowing her to save face which is showing her compassion and compassion is something she simply does not deserve.

We were a part of the outpouring of love and support for Courage and it was tremendously moving. Pet lovers of all breeds of animals were angered and horrified by what they saw. German Shepherd owners hugged their own dogs tight, sobbed uncontrollably and if they’re anything like me — their own dogs got special meals and extra treats. There were times I couldn’t sleep because all I could see were the photos of Courage’s skeleton-like body in my head. I cried almost non-stop for three days straight after his story broke and found myself crying each and every time more news was released. As much as all of this made me cry, I couldn’t stay away and searched for news every day.

Word of Courage’s fight for life spread like wildfire in German Shepherd communities from one end of the country to the other. When it was learned that he’d gained 20 pounds in one month I swear I heard cheering from every home across the country where a German Shepherd lives. I honestly have never seen anything like this in my entire life and even though the support and love was heart-warming, the reason for it was heartbreaking and I hope I never ever have to see anything like this again.

What Makes it NOT a Felony?

I do not understand how the legal eagles involved in this case can say that this case did not meet the standard for a felony conviction so it was dropped to a misdemeanor level. How can they sleep at night? Nizato literally almost successfully killed her dog in one of the slowest, cruelest and most painful ways that any animal could die. 28 days in jail, 3 years of probation and a couple of thousand bucks to pay is all this woman got for the pain and suffering Courage endured. Even prison would have been to good for Nizato — she would have been fed 3 meals a day and had a warm bed to sleep in — which is a helluva lot more than Courage got. I am ashamed of people like Nizato and of the courts for allowing sentences like this to be imposed. You are all a degradation to the human race.

Does the judicial system that handled this case really owe us people who followed this story and care so much about Courage anything? Probably not. We’re only involved with our hearts. But they did have a chance to really make a difference in the fight against animal cruelty and they blew it. This case was exceptionally publicized in my opinion — they could have hit home hard to all the courts who prosecute animal cruelty cases. Instead, they doled out nothing more than just another slap on the wrist. They could have sent a loud and clear message that this kind of neglect and abuse will not be tolerated and that those who participate in actions such as these will be severely punished! This case wasn’t just about Courage — the bottom line is that it’s about every single neglected and abused creature out there and all the people who are fighting so hard to get tougher laws.

Courage is Not Alone

Unfortunately, there are so many more just like Courage — he just happened to be the one that made the headlines. His story is unique because it was so well publicized and because he lived. Today Courage is a happy, healthy 95 pound dog. The sad part is that there are so many more that will never be found and even if they are — won’t make it. Courage is an icon who stands for what can be done when help is given. I don’t think there’s a loving German Shepherd owner out there that will ever forget him.

Thank goodness there are people like the members of GSROC and Lisa Whiseant who gave so much to bring Courage the life he has now. With every ounce of gratitude we have inside, we thank you, the vet staff and everyone else who had a hand in saving this beautiful boy! We’d also like to thank anyone and everyone who gives their time, love and money to rescuing and saving animals in need.

We love you Courage and we love everything you stand for!