Why and How to STOP OVER-Vaccinating Your Dog 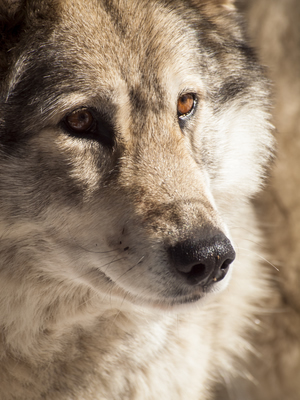 I don’t care how big and bad you think your dog is, I don’t believe there is a dog out there that stands a chance against a wolf. Sending dogs in to hunt wolves makes wolf bait of your dog which is no different than dog bait in the dog fighting world. There are people all over our country working hard to rescue dogs from dog fighting rings. In Wisconsin we have people that are not only willing to, but anxiously looking forward to sending their own dogs to be slaughtered in the same fashion. It makes me sick that we have a Governor who gave these people permission to participate in their own version of dog fighting and making hunting dogs into bait dogs. First there was dog fighting, then came trunking, now we’re pitting dogs against wolves? Governor Walker put his stamp of approval on this because were gonna call it hunting instead of dog fighting? That’s insane!

Not only will dogs die directly at the hands of wolves, they’ll die indirectly because many owners of dogs injured in dog-wolf confrontations will a) leave them to die in the woods or b) for various reasons they’ll neglect to get them vet attention or c) have the vet stick a needle in them because the cost to heal them would be significant and they probably don’t want to be bothered to care for their recovering dog or d) their injuries will be so severe they’ll have to put them to sleep to stop their pain and suffering. Hell, it’s just a dog and you can always get another dog, right?

Ahh, but Governor Walker does not walk alone …

I don’t have many memories of my childhood. For some reason I just don’t remember much about being a kid, I never have. But there are a few things I do remember, like it really disturbed me to see all the dead deer that my Dad and my brother hung in our garage and from the trees in our yard every year. I’d really like to forget these visions,  I wish they were among the things I don’t remember about being a kid — but they won’t go away.

Seeing dead deer slung over cars like sacks of potatoes, noses dangling out of the beds of pickup trucks and listening to hunters gloat over having killed a beautiful, defenseless animal literally turns my stomach. If you weren’t doing these things just to brag, you’d have the decency to at least cover your kill so that people who are sensitive to these visuals aren’t forced to see them.

Ok, so I don’t like or believe in hunting. Let me rephrase that, I hate hunting and I don’t care if that puts me in the minority nor do I care if people think my feelings are ridiculous or unrealistic. I don’t care if they just can’t resist the urge to poke fun at me for it. When they do, it seems quite likely to me that inside they’re secretly ashamed of their hobby and are simply making excuses for themselves at my expense. From this side of the fence it looks like apparently you hunters aren’t good enough with your guns to do this dirty job of killing wolves on your own so you have to enlist the services of innocent dogs to help you do it. How does this make you “the almighty hunter?”

And don’t give me that crap that you hunt to put meat on the table. This isn’t Little House on the Prairie anymore. Oh, so you think you save money by putting some venison in the freezer? I’ll bet if you do the math of what it costs you in supplies and gear to make that hunting trip and compare it to the money you tell yourself, your wives and anyone else that will listen that you’re saving, your hunting trip costs will far outweigh what you save in “free” meat. Hunting is a sport, plain and simple. You don’t fool us, you do it to get in some male bonding, to pump your egos and get your jollies out of it.

My feeling is that if you absolutely have to shoot a duck or a goose you should be responsible for fetching it yourself. It’s one thing to send a dog for a swim to retrieve it, but it’s quite another to send a dog into the woods to go face-to-face with wolves. The ducks and geese are already dead when the dog encounters them, the wolves are very much alive. Admittedly, I know nothing about how dogs hunt wolves so to be fair, I clicked over to YouTube to see if I could find some videos about dogs hunting wolves (telling myself that maybe it’s not so bad as I imagine) and you know what I found? Yeah, lots of “Viewer Discretion Advised” and “Disturbing Footage” warnings so what do you suppose that tells me?

The fact is that you’re sending your dog(s) into the woods where wolves live, where wolves will even kill another wolf to defend their pack and their territory, and where it’s likely that your dog will encounter a pack of wolves vs. a lone wolf.

If you’re a hunter and you’re feeling angry about what I’ve said, GOOD! Now you have a taste of how people like me feel about the cruelty of dogs hunting wolves.

Elizabeth Huntley went to Washington on September 7th on the request of the National Rally for Wolves to speak on behalf of Wisconsin wolves. In my mind she speaks for dogs and wolves everywhere. Governor Walker opened the door for other states to follow his yellow brick road, which means more state-sanctioned dog-wolf fighting activity and more dead dogs. I thank Elizabeth from the bottom of my heart for going to Washington and speaking up for dogs and wolves who can’t speak for themselves. Elizabeth makes a powerful statement about the correlation of dogs hunting wolves and dog fighting. I can’t agree more with her feelings and the words she spoke;

“I will be certain to give Gov. Scott Walker full credit for making Wisconsin the blood sport capital of the nation by legalizing the use of dogs to hunt wolves, thereby making this state-sanctioned dog fighting.”

Governor Walker’s agenda is all about Scott Walker and damn whoever or whatever he hurts to climb his personal ladder to getting his name in the history books. His kind of history the world does not need. Apparently the fact that he’s already significantly hurt and in some cases literally destroyed the financial lives of thousands of hard-working people in our state isn’t enough for him. People all over our country are working hard to eradicate dog fighting while Walker gives his blessing and worse — helps to promote it. Walker thrives on making himself fodder for the news crews just because he can and you’d have a hard time convincing me that he didn’t do this simply for the sensationalism it would bring to his name. Dog fighting is a felony in every state and when people are located who participate in this despicable, horrific “sport” they go to jail. So, why isn’t Walker sitting in a cell?

Humans took away the wolf’s habitat and now the few beautiful, majestic wolves we have left must sometimes kill domestic animals to survive. Do I like this? No. Animals killing animals to survive is one thing about nature that I find disturbing but like it or not, I must live with it. By taking away their habitat, humans caused this to happen, so why is this trade-off not ok? Because it costs money in loss of livestock? I chalk that up to the cost of doing business and there are alternative solutions. You don’t like wolves killing your livestock? You never heard of fences and barns?

I don’t care how you try to disguise this, dogs hunting wolves is an atrocious, shameful step backwards in the war against dog fighting. It’s a huge slap in the face to all the people who work so hard to break dog fighting rings and rescue dogs forced (by people!) into a life of pain and suffering. Like any war, there will be casualties.

To any hunter who tells me they love their dog(s) but yet will send it to hunt wolves, I call a you a liar. People who truly love their dogs would never ever intentionally send them into wolf country. Dogs thrive on doing things for their owners, they look to and trust us to care for and protect them. This is how you thank them for their love, their devotion, their loyalty and their never-ending wish to always be by your side?

THINK ABOUT WHAT YOU ARE DOING before you use your dog to hunt wolves! Because if you hunt like this, you’re are no different than Michael Vick and others like him.