Help! My Dog is GROWLING AT ME! 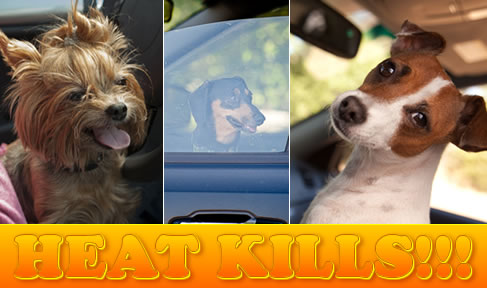 I don’t know how much more simple and direct it can be said: HEAT KILLS. It’s not a  foreign language, it’s just two little words — just two short little syllables and no different than saying “beer please” or “thank you.” We all know these are common every phrases that unless you’re disabled in some way, you’re physically able to speak them and probably already do.

This is not going to be a tactfully written article that beats around the bush so as not to offend anyone. This isn’t going to be pretty. I’m pulling out all the stops minus the really bad swear words — it’ll be hard work for me to watch my mouth on this one.  I don’t know of anyone besides my family who knows how enraged leaving a dog in a hot car makes me. I don’t even like to see dogs left in a cool comfortable car because there are dog thieves out there who are more than happy to smash your window and take your dog. If you think you have a dog that will protect it’s car — think again. All it takes is a nice juicy hunk of meat (or a gun!) to deter them from playing guard dog.

If you’re one to leave your dog in a car in the summer — then you should prepare yourself — because I’m very likely talking about YOU! Don’t bother to think for one minute that if you see yourself in this article that you have an apology coming from me. You won’t get one. You don’t deserve one.

How ANYONE can MISS the WARNINGS is Beyond Me

Warnings to not leave your dog in a car are everywhere — television news, newspapers, magazines, they’re broadcast on radio stations. Animal shelters, humane society and rescues post warnings on their websites. If I look I’ll bet I’d find plenty of mentions on Facebook, Twitter and probably a whole lot more of these social media locations. It’s in our faces and there is just absolutely NO WAY you will ever convince me that there is even one person in this world that hasn’t seen or heard the warnings. The have — they just choose to ignore them.

Wherever and whenever possible this topic is talked about. You’d have to be totally blind and deaf to miss this information. Even a person with limited common sense should realize the danger. I’m to the point that I don’t think even writing it in the biggest letters one can fit on every billboard on every street and every highway would make a difference. That’s probably about the only thing left that hasn’t been done.

But I LOVE MY DOG!

I’ve been fuming (no pun intended) about this A LOT these past two weeks. I absolutely, positively can NOT understand the STUPIDITY of people. We’ve had several weeks of record high heat and drought in our area. In the past two weeks alone I know of at least SIX dogs just in our city that have been left in cars with the windows just slightly open and NOOOOOO WATER! These same people  will probably all profess their love and devotion to their dogs — ohhhh puhleeeeeeze. You’re a freaking liar is what you are!

Oh and just in case you’re stupid enough to think that providing water will guarantee your pet will make it through your intentional neglect and cruelty (yes, that’s what it is) — think again. Water may prolong their life a little longer — like long enough for brain damage a chance to set in. Let’s face it, when you cook your brains you’re probably never gonna be the same again — and neither is your dog.

What’s that you said? You love your dog? If this wasn’t so damn serious, comments like that would be laughable because your actions are telling a whole different side to the story.

What part of “HEAT KILLS! Don’t leave your pets in a car! “ do these blithering idiots not understand?

Oh, but they love their dog and let’s not forget that the windows were open a little. Seriously? Give me a break, I didn’t just fall off the turnip truck. Telling someone you love your dog after you’ve just intentionally put him or her in danger is like the most unbelievably STUPID THING you can say. No one in their right mind is going to believe you.

With the windows open a car is still NO PLACE to leave your dog in hot weather! A dog’s normal body temperature is 100 to 102 degrees. Even in 70 degree weather the temperature in a car rises at warp speed hitting 80, 90, 100 degrees in record time! Would YOU put on a fur coat and go sit in a car in that kind of heat? Would YOU sit in a car this hot even without a fur coat? Would you force your children or your Mother sit in this car? That’s what you’re doing to your dog. People have the ability to get out of a car — pets don’t. Last I knew there’s no such thing as pet friendly dashboard faucets, therefore no way to get a drink of water.

What Happens to a DOG IN A HOT CAR?

Just in case you don’t believe me, you should read these:

If these aren’t enough to scare the living hell out of you then there is no hope for you and even less for your dog.

Answer? Leave the AIR CONDITIONING ON!

Eh, wrong answer! Cars are machines, machines malfunction. There have been a number of instances where squad cars that transport K9’s and are equipped with generators that are designed to kick in should the air conditioning go flakey — don’t — and the K9’s have died. If the most prepared vehicles on the streets can’t guarantee a dog’s safety in the heat — what makes you think you and your car are any better than that?

Hot Cars are NOT the ONLY Danger

Have you ever touched a sidewalk that’s been baking in the summer sun for hours on end? Do you walk barefoot on sidewalks hot enough to burn? I didn’t think so. Your dogs are more or less barefoot and those little tufts of fur between their pads only goes so far to protect them from heat or ice. Taking your dog for a walk in the heat not only puts them in danger of heat stroke but to burning the pads of their feet. You can liken it to tossing a raw hamburger in a hot skillet – ttttsssssssss!

If You REALLY DO Love Your Dog

Always remember that good intentions won’t save your dog if that planned 5 minute dash into Walmart for “just a couple of things” winds up being even 10 minutes.  In case you haven’t noticed in this world there are at least two things that can go wrong: 1) a disaster or other emergency 2) Murphy’s Law. You and your dog are not immune to these or other unexpected delays in you returning to your car promptly which could result in tragedy for your dog.

Dogs love to be with their people and ride in cars. They don’t like being left behind and they don’t know about the danger. Even if your dog kicks up a royal frenzy wanting to go along — YOU are responsible for your dog’s safety and YOU are the one that needs to step up and put your foot down. A good parent would not allow the temper tantrum of a child to sway them into doing something that could be dangerous for their child. Your dog is no different.

People who truly love their dogs will NOT intentionally put them in any kind of danger and they will leave their pets at home when the weather makes this the appropriate choice. Even if you don’t have air conditioning at home, you more than likely have a fan blowing, open windows, accessible water and many more places than being confined in a vehicle holds that your dog can move around to in order to help cool themselves — like the basement for example.

Do not wait a single moment to help them and get help for them. That means a veterinarian not Gramma’s home remedies. There may already be internal damage that isn’t visible to our eyes but will be to a vet. Some of the links above not only tell you what the heat will do to your dog, they also tell you how to try to save your dog. Scroll down towards the bottom of the big green image and you’ll find helpful information.