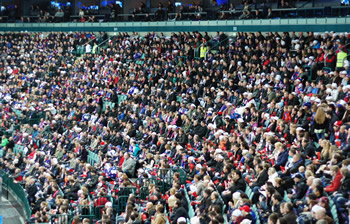 It’s becoming very popular to use special events for fund raising and pet adoptions. Rescues and shelters bring adoptable dogs with them in an attempt to try to find them homes, it’s another version of adoption fairs. I commend them for their efforts, but I’m more concerned about the emotional health of the dogs in attendance — both those that need homes and the dogs who’s people bring them to these activities. The most recent event I read about is the Milwaukee Admirals joining up with the Purina company for Purina Dog Day where they’re currently expecting more than 500 dogs to attend.

Bringing dogs to events like this can be very stressful on a dog! Thinking of the hundreds and sometimes perhaps even thousands of people attending, the noise and the commotion and how it can affect dogs is disturbing to me. Oh sure, it’s great fun … FOR PEOPLE! But for dogs I visualize a lot of stress and of course this kind of stress can be an open invitation for a bite(s) to occur. Let’s face it, there are more people than not that don’t pay attention to what’s going on with their dogs emotionally, they blow it off saying things like “They’ll get over it!” or perhaps they simply aren’t dog-behavior-smart enough to realize some of the signals their dogs are displaying are stress related. A stressed dog can be a dangerous dog.

We’re not talking about a dog show here where you have nothing but dog-savvy people with very well trained dogs. Even dog-specific events such as these are not 100% incident free. On the other hand, something like what the Milwaukee Admirals and Purina are planning is more like a free-for-all. I’m not bashing the Admirals, I’m sure they are full of good intentions. As for Purina, I have no use for them whatsoever. They sell inferior products and what they’re doing here is nothing but a publicity stunt to help them sell more inferior products to unsuspecting people who think they’re giving their dogs a high quality products. Check one of the the food grade lists for their products if you don’t believe me.

Fun for Humans is NOT Always Fun for Dogs

These types of events are for the enjoyment of humans, not dogs! Here are some things to think about before you subject your dog to something like this … and believe me … you are subjecting your dog … I can pretty much guarantee you that he’s not having fun like you are.

Are there dogs that can handle things like what I’ve mentioned above? Certainly, but they are few and far between. The general dog population cannot and to put them in a position of having to deal with this kind of stress is just wrong. It’s not like they can say “Thanks for asking me to join you but I think I’ll stay home where it’s quiet and safe for me.”

Watch the Game — Adopt a Dog?

Another thing to consider are the rescues and shelters who bring in dogs for adoption. I really have a hard time with this. These people are supposed to know better than to intentionally put dogs in a stressful situation yet this kind of fund raising and adoption technique is gaining in popularity which really blows my mind. I totally get it that there are many many dogs needing homes and the rescues and shelters need as much exposure as possible to help this happen. I just think for the health and welfare of the dogs that they need to be more selective where they do this kind of thing.

At an event like this dogs are not going to be their normal self. This means you have people basing their decision to adopt or not adopt a dog that is very excited and under stress and so they’re not getting a true picture of the dog’s personality and emotional health.

It’s great that the shelter and rescue people are working hard to find loving homes for dogs in need but to me, this kind of event is just not the time and place to do it. If these organizations want to fund raise at events like this — go for it! But there are safer-for-the-dogs ways to do it. Take a big can for collecting donations and big posters of adoptable dogs. It may not have quite the same effect as a cuddly puppy or an adorable dog all squiggly and wiggly with excitement with that “Will you take me home?” look on his face, but it’s a damn site better than exposing him to things that can endanger his safety and emotional well-being.

Soft Hearts and Decisions Made too Quickly

Trying to adopt a dog into a new loving home in this manner reminds me of what stores do to get impulse buyers to spend more money before they walk out the door. Stores put snacks and other nifty little things near the cash registers which encourages people and makes it easy for them to spend a few extra bucks on that candy bar or novelty item. A dog is not a novelty nor should it be an impulse purchase (adoption). I picture kids begging to take these dogs home and parents caving in to their begging in the heat of the moment or even adult dog lovers who aren’t really ready to have a(nother) dog but just can’t resist that adorable face. Even if they have to go through the full adoption process and they don’t get to take the dog home that very day, getting a dog this fashion is still too close to being an impulse purchase in my opinion.

Oh yeah, and don’t forget that every dog adoption might just come complete with a supply of Grade F Purina products! Just the thought of any dog ingesting Purina anything makes me want to scream!

Dog lovers get tangled up in their emotions when it comes to dogs (guilty as charged!). Putting a dog in need of a home in their faces can make for poor decision making. Many people are not going to be thinking clearly about the long term responsibility a dog is or that adorable puppy is not far from becoming a dog. I don’t even like to think about what happens to many of these dogs a few weeks or months later when the novelty wears off and the reality of what they’ve really done hits.

A Good Dog is a Well Socialized Dog

Absolutely! However, this kind of situation is in my opinion NOT a good way to socialize your dog, it’s people-and-other-dog-overkill which could very well do him more harm than good. If you want to expose your dog to significantly smaller groups of people as part of your socialization training (PLEASE DO if your dog can handle it!) I urge you to instead do your meet & greets by standing outside of places like Walmart, take them to pet stores that allow dogs in the store, include them in family picnics and gatherings where it’s legal for you to bring a dog. Let them interact with people in smaller doses. There’s a huge difference between groups of people and crowds of people.

Most dogs love people but for your dog’s sake, use good common sense! Whatever your reason is to want to bring your dog with you to people oriented event where there are multitudes of people and loud noise, please stop thinking about your own selfish desires and put your dog’s health, comfort, emotional well-being and safety first. Your dog would never intentionally put you in a stressful situation like this, so why would you do it to him? There are just some places that are not good for dogs to be and from where I stand, crowded, noisy people events is one of them.