Adopting a Shelter or Rescue Dog 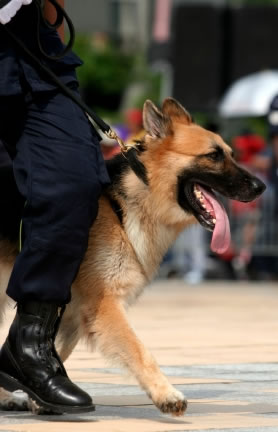 One of my new favorite shows is K9 Cops on the Animal Planet television channel. I love watching Police dogs in action. So much of what these dogs do is truly amazing to me but at the same time they’re also just being dogs. When these dogs take down a bad guy, they’re getting thumbs-up and atta-boys from my place in front of the tv.

The St. Paul Police Department has twenty one K9’s which is really an impressive number. I haven’t studied the numbers but that’s the most dogs I’ve ever heard of on one department. There may be other departments with larger K9 units. From what I can tell, the dogs and their handlers are extremely well trained. St. Paul spends a lot of money on K9 training which in my opinion is without a doubt money well spent. If you’re going to have K9’s on your department it’s imperative that both the dog and the handler be exceptional at their jobs. Not only can ineffective dogs and handlers be an unsafe part of a department but if not done right, cases can get thrown out the window on a technicality faster than you can blink an eye when it comes to prosecuting the bad guys.

As much as I love watching this show, there are some safety issues that really bother me. In fact, I’ve been so bugged by it that several weeks ago I actually emailed the Chief of Police off of their web site. I haven’t received a reply but then I really wasn’t expecting one. I just wanted to get my point across to him and hope that he will take some positive steps to get the St. Paul K9’s better protected.

The show majorly stresses Officer safety. It’s an intrigal part of the show’s theme and is talked about several times throughout each episode. I like this, it’s a good thing. However, the safety issue seems to revolve around the Officers and pretty much totally ignores the dogs! I have no qualms about keeping Police Officers as safe as possible and since the use of K9’s is helpful to accomplish this – it too, is a good thing.

A smart cop wears a bullet-proof vest. Wearing a vest is not a 100% guarantee of survival but it sure has a much higher potential of stopping a bullet before it injures or kills than not wearing one. I like the survival odds much better for a cop wearing a vest than one who doesn’t. The K9 is considered to be an Officer but I have yet to see a K9 on this show wearing a vest. I hear repeatedly in the show how the handlers feel their dog is their partner, their protector and they say this works both ways. They talk about their own and their family’s love for these dogs. But do they show it by providing for their safety? I don’t see it.

Just the other night one of the higher ranking Officers commented that the dogs are often first to go in to a dangerous situation and how that helps keep their Officers safe. These dogs are going in without vests. What protects them from taking a bullet or a knife in the chest? Where is the respect for their lives and the love for the dogs?

In tonight’s episode, there was a segment on the St. Paul K9 Cemetery where there are several Police dogs buried, killed in the line of duty. The Officer mentioned how emotionally painful it is to lose your K9 partner, but then went right on to say in a very casual tone that it’s worse to lose a human Officer. Well, maybe for some people, but to me there wouldn’t be much difference. A partner is a partner whether it walks on two legs or four. How many of these dogs would be alive today had they been wearing a vest while performing their duties? How many Police dogs have to die in the name of protecting human life before our Police Departments wise up and protect them in the same way they protect their human Officers? Not vesting an active member of a Police Department is wrong! As much as I love watching these dogs in action, Police Departments who treat such important members of their organizations without apparently caring one iota for their safety are really starting to make me angry. These dogs gave their lives to save a human. They took the bullet or the knife or whatever, intended for their two-legged partner or lost their lives attempting to take a bad guy into custody. This person may have just severely injured or killed another human being that could be your spouse, your child, your Mother or Brother. This dog may have just prevented your child from picking up a dumped bag of illegal drugs that could kill him or her. There are endless possibilities as to what this dog was doing when he died to help us all. We as a society, should all be forever grateful and show our appreciation by seeing to it that we do whatever it takes to insure that other K9’s don’t suffer the same consequences.

Is it that bullet proof vests for dogs are expensive? If that’s the reason, it’s a lousy excuse in my opinion. The cost of a K9 vest doesn’t come close to the cost or replacing a dog and the loss of a dog can be devastating. I can say without a doubt, that if I were a K9 handler and my department did not provide a vest for my dog, I’d be paying for it out of my own pocket. I can not think of one single acceptable reason for these dogs to be vest-less.

One amazing young lady in California felt the need was so great to vest our K9’s that in 1999 she started the Vest-a-Dog Foundation. Stephanie Taylor was just 11 years old when she began her quest to help keep our K9’s safe and last I heard, Vest-a-Dog has contributed to vesting more than a thousand K9’s. Stephanie, you are an amazing young lady! If an 11 year old child can see the need, why don’t Law Enforcement agencies who don’t vest their dogs see it?

Use HARNESSES NOT COLLARS for K9s

Have you seen how these dogs pull when they’re tracking? Sometimes you can hear the dogs breathing, or should I say choking? How would you like to go jogging or running wearing a neck collar with someone holding on tight to the other end of the leash holding you back? Just for the heck of it, spread your hand, put your first finger and thumb around the front your neck, lean your neck forward and push into your neck with your hand. Now imagine tracking down a bad guy like that. It’s even worse for the dog because they don’t realize they may hurting themselves. Dogs handle pain differently than humans, it’s part of their inherited survival mechanism. They’ll continue to work after being hit by a car, after being shot or stabbed, you name it. If they can get up, they’re going to keep going. They’re going to continue to serve and protect for as long as their bodies will let them and by the time their bodies put a stop to the action it may be to late.

Harnesses are made for pulling, they are designed not only to allow the dog to pull without pain or physical harm, but harnesses encourage pulling. Do you see Alaskan sled dogs wearing neck collars? No! They are harnessed not only for their protection but because the harness helps them to do their job more efficiently. I tend to think a harnessed K9 would be even more effective than one being choked by a neck collar. He’ll also live longer and won’t require expensive vet bills to attempt to fix the damage done by a neck collar.

With all the training these K9 units get, why haven’t they learned that a neck collar is not what should be used? The potential for permanent pain and damage to the dogs throats is sky high! I have seen just one of the St. Paul Officers switch their dog over to a harness when they’re going to be tracking. Being that these dogs are very high energy anyway and always ready to do their job, why not just do away with neck collars altogether and use harnesses instead?

Where is the K9 RECOGNITION?

This may change by the time you read this, but I just checked the St. Paul Minnesota Police Department web site. The dogs and handlers who work so hard to serve and protect the citizens and Officers of St. Paul, the same department members who now have a successful show on national television, don’t have one single page on their own department’s web site. They have a page honoring their fallen human officers, but nothing honoring the K9’s that have died in the line of duty. They have a links page where you can find links to their K9 Foundation, but these links take you off the official site onto other sites. Where’s the love and respect for these courageous fellow department members?.