What’s the Craziest Thing Your German Shepherd Has Done? 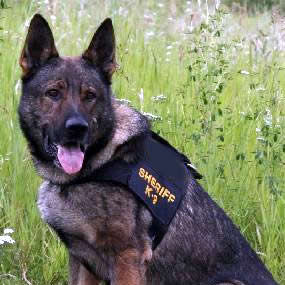 I just don’t understand this at all. Its always been my understanding that when a Police Department retired a K9 the Police Officer (K9 Handler) kept the dog like you’d keep any pet dog. Twice now in the past couple of months I learned that this is not always the case. Here are a couple of appalling horror stories of two retired K9’s. (Note that the photo is not of either of these rescued dogs!)

Very recently a retired K9 was found in an Illinois animal shelter. The handler had given the dog away and the people that took her in could not or didn’t want to keep her so they took her to an animal shelter where some wonderful people rescued her, fostered her, nursed her back to health and then turned her over to a German Shepherd Rescue where she’s currently being cared for pending adoption. I do not know what kind of nursing care she needed but being a retired K9 she should have been in good health to begin with. Thank you to the people who took the time and spent the money to care for her! I almost adopted her myself but I’m constantly fighting the “two dogs is enough” argument that constantly goes on in my head. If we could, my husband and I would probably take them all in! It just breaks our hearts to see the neglected and abused animals out there.

Retired K9 Locked in a Dog Run and Starved

The other K9 I learned of had an even more horrendous retirement. The handler locked him up in a kennel run for two years and ever so graciously fed and watered him just once a week! This poor thing had nearly torn his entire nose off trying to get out and suffered some horrendous pain and permanent health problems because of it. When I heard this I was absolutely furious! Again some wonderful people stepped in and were able to take him to a German Shepherd rescue where he received the care he needed and now lives a wonderful life with a loving family complete with a swimming pool to swim in!

Police Officers are Supposed to Care!

You would think they would especially for an animal who was their partner for however many years they spent together. Police Officers are supposed to fight animal cruelty by enforcing the laws and calling in the appropriate authorities to assist when they are faced with any animal suffering from neglect or cruelty. What kind of Police Officer would give their partner away? Depending on what the dog was trained for, they may need a very special home with a family who knows how to care for a trained K9. you certainly don’t want a take-down dog given to just anyone. Without the proper owner, this could mean a tragedy waiting to happen. What kind of Police Officer would lock their partner away in a kennel run and starve it?

What Kind of People are Our Law Enforcement Agencies Hiring?

Both of these K9’s were rescued from the State of Illinois. What the hell is going on in Illinois that would allow a Police Officer to do these things? I don’t know about you but things like this really make me wonder what kind of people our law enforcement agencies are hiring that are duty bound to protect and serve? Police Officers are supposed to care, they’re supposed to know better! They’re supposed to recognize and help alleviate pain and suffering not cause it at their own hands. If they’ll do this kind of thing to their K9 partner, what might they do to a human partner who needs them to back them up? Would they leave their human partner laying in the street with a bullet in them?

If for some valid reason the handler can’t keep the dog, there are people out there more than willing to take these dogs into their homes or organizations that will find the dog a good home. These dogs have put their lives on the line. These dogs would die for their human partner and are too often put in the position where they take a bullet for their human partner. They sniffed out drugs, bombs, took down bad guys, found lost children, located lost adults perhaps suffering from things like Alzheimer’s and backed up their human counterparts, doing a job that even some humans would never do. They loved, they served … only to be thrown away like garbage, abandoned or left to suffer at the hands of the person who they loved, cared for and protected so valiantly.

Police Agencies Need to Keep Tabs on Their Retired Dogs

Police agencies put mega-bucks into their K9 programs. Much funding comes from public donations and fund raisers held by citizens who truly want a K9 in their Police Department. For the duration of the dog’s service they are supposedly loved and cared for by the handlers. After they’re retired they more than deserve to be honored and respected, to have a happy, safe life with the handler that they devoted themselves to for so long. If that isn’t possible they should go to a loving forever home with people prepared to care for a dog of this nature.

So, what happens within the agencies themselves when a dog is retired? These two stories make me wonder. Do they not have requirements for the dog’s after-service care? The agency brought this dog into their care – they didn’t just hire a new employee. They have a responsibility to it. So where are their heads after retirement? Because it “served its purpose” it doesn’t matter anymore? These dogs don’t get a pension! Do the people who worked so hard to get the department their K9 know what happens to the dog after retirement? Or is this swept under the rug? If they knew what happened afterward, do you think so many of them would work to get and keep K9’s on their respective departments?

I’m beyond furious at and more than ashamed of the Police Officers who did this to these dogs and the departments who let it happen. I hope that somehow, some way they are made to pay for what they’ve done. Police Officers should not be immune to the laws they are sworn to uphold. Police departments really need to be sure that the Officer they’re allowing to handle their dogs is properly suited mentally, physically and emotionally to care for it not only during it’s service time but after. Judging from the fate of these two dogs (before rescue) the agencies who entrusted their dogs to these handlers did not do this. It makes me wonder just how these dogs were cared for during their service! No dog deserves to be treated as these two were, but to treat a Police K9 like this is nothing less than unforgivable and inexcusable. How many more dedicated K9’s both in service and retired are suffering?

Riley’s Place thanks everyone involved who rescued these two wonderful dogs and work to make better lives for them.