Do You Believe in Animal Communicators?

Driving With Your Dog’s Head Out the Window

CANINE BLOAT – When Being Paranoid is a Good Thing

Do You Believe in Animal Communicators? 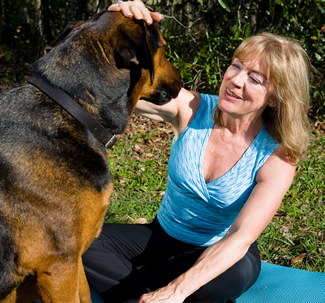 The other day I met a woman named Maureen. We both have German Shepherds and so of course that was our main topic of conversation! Maureen mentioned that she’s had the opportunity to work with an animal communicator and I was all ears wanting to hear more. She told me the story of a dog that participated in a session with an animal communicator and it was pretty cool and in Maureen’s estimation was quite successful. After the session, the dog seemed very happy and they saw a definite change for the better in her.  I felt the questions she told me that had been asked were pretty general in my opinion and pretty much relate to the behaviors and characteristics of the German Shepherd breed in general. I decided then that should I ever participate in a session, I would want my questions to be more specific and geared specifically to my dogs. I’m also keeping in mind that our conversation was on numerous different topics and what Maureen shared with me was just a general overview of the entire communicator session and so there could have been more questions asked that were specific to that dog that I’m just not aware of. I’d love to talk with her some more, I had such a great time and would also love to hear more about her experiences with the communicator. I find the whole communicator thing quite  fascinating to tell you the truth. I hope we get another chance to chat and hopefully, I’ll get a chance to meet her furkids, too.

I’m still not 100% convinced that animal communicators can truly communicate with animals, but I do 100% without a doubt believe it’s entirely possible. For me it’s not fact yet, but if you think about it, there are psychics for people that have proven themselves, so why not do the same thing with animals?  For me it’s kind of like ghosts … although I’ve never seen one up close and personal, I can’t say I don’t believe in them. In fact, I think they really do exist and would love to meet at least one … long as he or she was the Casper type, you know … friendly and not scary! My daughter has seen ghosts and a few times been really freaked out over them.

I’ve been seriously thinking about giving an animal communicator a try. I’m beginning to formulate the things in my head that I’d like to talk over with my furkids via the communicator and the next step will be to make a list so that when the time comes (and I’m pretty sure it will fairly soon) I won’t forget anything. Maureen was very complimentary of the communicator they’d used and so I’ll probably just go to her. What has stopped me from attending a session so far is the cost. I just assumed they’d be quite expensive, but at least this one is not and if it turns out to be a scam, I won’t be out enough money that it would really hurt.

I’d love to get more input on the whole idea of animal communicators from you folks that have been to one. Won’t you please take a few minutes and share your experience  in our blog? After we have our session, I’ll come back and share our experience.