Tethered Dogs Can Be Deadly Dogs 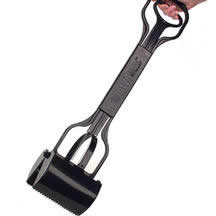 It’s a dirty job but someone’s gotta do it. There are a number of fancy gadgets on the market for picking up your dog’s poop. Pooper scoopers come in assorted shapes, sizes and configurations such as shovels, double sided scoopers, spoon type scoopers, and the list goes on. There are even compact portable type pooper scoopers designed specifically for when you’re out walking your dog. I’ve tried a number of the plastic and metal scoopers and found them to be not-so-user friendly and they tended to break easily. Scoopers aren’t cheap either. At $15-$30 and more per gadget I’d estimate I’ve spent a few hundred bucks over the period of 2-3 years and never did find one that was truly sturdy and user-friendly. Plus, when you were done there was alway some “leftovers” remaining on whatever tool I’d used.

For awhile we had a Doggy Dooley buried in the yard. Didn’t take long for us to realize it didn’t work as well as their website says it works. Then came the day that Nissa (then a puppy) chewed through the portion of the cover that attached it to the container which meant the cover was no longer attached … making it a fun Frisbee type toy for her to grab and run around the yard with. Eeee-yuuuuuu! The stench was horrendous and more importantly there was the danger of them stepping into the buried container when rompin’n’stompin’ in the yard and breaking a leg or something. That didn’t happen but there was the day her inquisitive nature led her to lean to far into the open container and she backed out with liquid pooh covering her head and shoulders. The Doggie Dooley was removed the day Fur Dad got back from his current road trip.

A few years ago, the Fur Dad went back to work as an over the road truck driver leaving me to do most of the household chores. Between my full-time job and my web work I barely had time to keep the house clean let alone the back yard. Lemme tell’ya, having two German Shepherds and a very small yard made for quite the stinky mess and keeping up with it was something I just didn’t have time to do. Do you have any idea how much two dogs can poop!?!?  It was hard enough making time to spend with the dogs and I sure didn’t want to have to spend that time cleaning up the yard. On the other hand, if we wanted to spend some time in the backyard, I had to clean it up so we aren’t dodging piles. Riley hates it when his ball lands in a pile-o-poop for which I don’t blame him one bit!

With so very little available time, I didn’t want to spend it cleaning up the backyard so my solution was to hire a professional pooper-scooper guy to come do that for me. Yes, there really are companies out there who do just that, come to your house and clean up the dog poop! The company I hired charged me just $12 per week to clean up after two dogs. Considering the service they provide I felt the price was more than reasonable. I can’t imagine doing this for a living!

Because they only came once a week (weather permitting) and a lot of poop can accumulate in a week’s time (or more if the weather didn’t cooperate) this was definitely not ideal but it was better than me having to do it it. After a year or so the economy took a dump, our finances took a hit and we were forced to make some cutbacks. You guessed it, the pooper scooper guy had to go and … sigh …the unpleasant task of keeping the yard clean was back to being my job.

what I learned from my pooper-scooper-guy

This time I was going to be smarter about it. Prior to the very first visit my pooper-scooper-guy made, I had visualized them arriving armed with shovels, garbage cans, gas masks came to mind and who knows what other tools they might use. It just made sense to me that if you do this for a living and you of course want to be efficent, aren’t you going to have the best tools available?

I originally hired them on their Spring Clean Up special so we’re talking a yard that pretty much hadn’t been picked up all winter. Imagine my surprise when my pooper-scooper-guy arrived for the very first time and cleaned up the entire back yard armed with nothing more than some latex gloves and plastic bags like the ones you bring your groceries home in!

So, when it was time for me to take this job on again, I immediately went to Walgreens and purchased a box of latex gloves and I now save all plastic grocery bags. I try to tackle this stinky job every day but no more than every other day and when I know it’s going to rain I make sure to get out there and clean up before the rain comes whenever possible.

I’m lucky because due to the raw diet we feed our dogs I usually have well formed logs to pick up and can get the job done in probably five minutes or so. I then peel the dirty glove off (only need one per clean-up session) so it’s inside out as it comes off my hand, drop it in the bag and tie the bag up then drop that bag into a second bag to help cut down on the odor from the trash can. When we go out for a walk I stuff a few bags into an outer bag, toss in a few gloves and tuck the whole thing into the waist of my pants. I haven’t found a better tool for scoopin’ poop than this.

Make sure you get good quality gloves to keep the chances of them ripping to a minimum. I haven’t had this happen so far. I get the blue ones from Walgreens, 120 gloves in a box for $15 and change, less when they’re on sale and they’re well worth every penny. A bonus for me who doesn’t like to touch raw meat, I also use them for handling the meat.