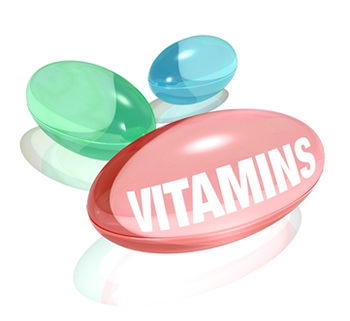 Several months ago I read an article in Dog Fancy magazine about how Vitamin B can help with things like mood, stress, over-activity of several kinds and a few other things that affect dogs negatively. I figured what the heck, I’ll give it a try. After all they’re just vitamins. Ohhhhh my … be careful how you say that!

After spending hours upon hours researching to try to match the Vitamin B’s that appeared to be the ones that might help curb Riley’s anxious moment, I found two brands that seemed to fit best. I purchased one brand and the first couple of months went well, I could have sworn I noticed him becoming a bit more calm. Nothing tremendous, but a slight improvement.

When those were nearly gone I ordered the other brand. My goal was to see which brand might help him the most and then I would stick with that brand. When the second experimental bottle was nearly gone I decided the first one seemed to do the most good so I purchased the giant economy size and figured we’d be all set for about two months. All the products I researched and the two I tried come in chewable tablet form and I just tossed them into their food bowls and they scarfed them right up.

I don’t pay a whole lot of attention to his window-antics anymore. We learned long ago and after trying about a dozen different methods of positive behavior modification that this is one behavior this boy is just not going to give up. He’s convinced that the mailman is an alien from outer space who’s landed and going to take us far away from here and that people walking by our house are all out to break in and murder us and that it’s his job to be the one to keep that from happening. Believe me, nobody in their right mind would try to get in our house. Not if they value their body parts.

Well, one day I happened to be standing in the living room when the mailman made his rounds. Suddenly he morphed into his usual Guard Dog personality when suddenly he stopped barking just long enough to turn his head, reach over and bite the couch!!! This dog is over six years old and has never ever damaged any furniture! This absolutely was a new (and very unwelcome!) addition to his guard dog personality.

My eyeballs and my teeth about fell on the floor I was soooooo shocked! I snapped “NO!” as sharply as I could and he stopped immediately and went slinking away leaving me standing there open-mouthed and totally flabbergasted. I do think I was a second or two late for him to correlate the biting activity with the “NO!” response from Mom so I made it a point to stand there the next day when the mailman came around or when he started going off at someone walking by. The next time he did it, I was a bit quicker because I was looking for this behavior and when he did it again I was Johnny on the spot with my “NO!” He dropped his head in shame and looked at me with those big brown eyes, sorry as sorry can be and then went slinking away into the kitchen.

I had been racking my brain trying to figure out where this new destructive and actually very scary behavior came from when it dawned on me that perhaps he’s allergic to something in the vitamins. So, I immediately stopped giving them to both dogs and this even more over-the-top biting the couch thing stopped very quickly. I still have to sew up my couch, but he doesn’t bite it anymore!

When Your Dog does Something Out of Character

This to me was a perfect example of paying close attention when you’re trying a new edible product for your dog. Whether it be vitamins, food, treats or whatever. If you suddenly see some bizarre behavior in your dog — don’t just assume he’s being a bad boy without a good reason. I would bet you 99% of the time it’s something that there is something “outside your dog’s control” causing the problem. In our case, my guess is that either Riley’s allergic to something in the vitamins or he could have wound up with vitamin-overload due to the vitamins he gets via his raw diet. If you’re feeding your dog properly on raw diet, the chances of them needing any kind of vitamin supplement is pretty slim.

If your dog has behavior issues, do some testing with alternative products or better yet if you can remove possible offending products from his diet and see what happens. Allergies and over-load on anything can contribute to behavior issues.