Can You Help Brenda KEEP HER DOGS? 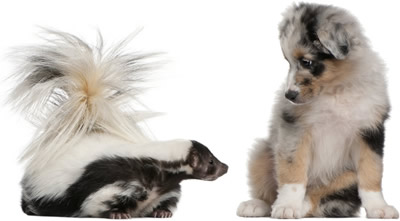 In June we were out for a walk about 3:30am. In the dark I saw something moving and was expecting a rabbit to bolt. Unfortunately, it wasn’t a rabbit and the FurKids got to meet their first skunk! Ugh! Thank goodness I realized what it was quickly enough and was able to quickly pull them away but not before I heard the “psssst!!!” sound and got a whiff of the the resulting stench. As we took off running I kept hoping it was just in the air and that neither dog actually got zapped. No such luck. The news wasn’t all bad. Nissa didn’t catch any and Riley only got the “tail end” of the stinky stuff so he wasn’t completely doused in e-u-de-pew!

As soon as we got home I hit the Internet looking for a way to get skunk out of a dog. I’d always heard that tomato juice would do it but I didn’t have any and not only was there no place open to buy large quantities at 3:30 in the morning (we live in a small town) but I really was not relishing dumping tomato juice all over my dog! Just the thought of that mess was someplace I did not want to go! I don’t have facilities for a true good dog wash and my only alternative was picking him up, over and into the tub and using a pitcher because our shower head is not one you can pull off and use like a hose.

Thank goodness I was able to find an alternative to tomato juice which included two ingredients I did have in the cupboard — baking soda and vinegar! Yes, really! Now I know what these two things do when you mix them together — you’ve got a nice little science experiment going is what it looks like. I thought the author of this remedy was crazy! I couldn’t imagine dumping these two things together, watching it foam up and then dousing my dog with it. So, I kept looking thinking this person was crazy and that I’d hurt my FurKids if I used it. But guess what? I found article after article on good dog sites that gave the same remedy. I figured as long as these popular dog sites felt it was safe it should be OK. He’d taken the hit to his shoulder so I didn’t have to get close to his eyes, ears or mouth to do this.

Every article I read stressed speed in getting this done because skunk stink is actually an oil that sinks into their coat very quickly and you have to make sure to not your dog get on any fabric such as carpeting or furniture or you’ll have the stink in that as well.

So, at 4am Riley was in the tub (ugh — he’s heavy!), I’d mixed up my potion and started my attempt to wash the skunk out of him. Since baking soda is known for doing a good job removing odors I had some hope and WOW! It worked! Unfortunately, I didn’t have enough of these two ingredients on hand (you’re supposed to really soak them with it) so when were were done there was still a very slight odor on his wet coat when you got up real close. Several hours later he was dry and you really couldn’t smell it unless you buried your nose in his shoulder.

As if ONE SKUNK Wasn’t Enough?

About three weeks later about 5:30am shortly after first daylight we were in the field we go to for our off-leash rompin’ and stompin’ sessions and suddenly from a distance I saw Nissa jump back, drop and roll. I panicked thinking she’d found something dead to roll in or that something was really wrong. I blew the whistle I carry around my neck and they came running … and as they raced back to Mom they brought something with them and it became more than obvious why she’d done the drop and roll thing. Yup, she got her shot at meeting Pepe Le Pew’s distant cousin up close and personal. I’m convinced this was the start of the run of Murphy’s Law that’s been hovering over me the past six weeks or so. I mean seriously? TWO SKUNKS in three weeks?

She took a direct shot to her forehead just above her eyes, none of that sprayed-from-a-distance lucky break. Ugh. I knew I’d never get her in the tub — she outweighs Riley, has longer legs (and I’m quite short) plus she’s afraid of the tub so she’d fight being put in it — so I decided to try the downstairs shower which is only a one-person-stand-up shower so not near enough room for both of us to get into and close the door. We made one heckuva wet mess because I had to do this with the shower door standing open. I had to be very careful to not get this stuff in her eyes, ears and mouth. This was real work and her coat made this wash-job more difficult than Riley’s. Because of the close proximity to her eyes and ears I made more of a paste and rubbed it on rather than dumping this stuff over her head. I got most of it out, but since she’d gotten hit dead-on she was much more odorificous than Riley was.

We got most of it out and I did call the groomer (like seconds after opening hours!) but we had to wait a full week before she could get in for an appointment! So for a week we were blessed with a hint of ol’ Pepe on her and in the house. When I picked her up a few hours later her coat was just slightly damp but you could barely smell it. After she was completely dry and unless you got your nose right down into her face you didn’t really notice it. Rain or moisture would bring it to the surface again but it was more than tolerable.