Does YOUR Puppy Have JAWS SYNDROME? 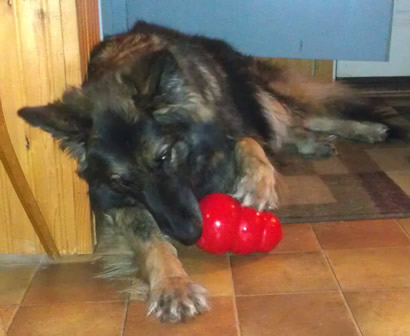 Kongs are favorite toys for millions of dogs all over the country — this is our Nissa with her Kong. Some dogs carry their Kongs wherever they go, like a woman carries a purse or a small child carries their blankie. It’s the old “don’t leave home without it” routine. People throw Kongs to their dogs just as they would a ball or simply toss it to them in the hopes the Kong will keep their furry family members busy for awhile no different then sending a child to their room to play. Translation — go away and don’t bother me for awhile.

Your dog may be obsessed with it’s Kong but I found that my furkids had no interest in a boring empty Kong. I’d give them a Kong, they’d sniff it and look at me like “Really? You’re kidding, right?” Then they’d walk away or leave the darn thing just lay there which left me wondering “What’s wrong with my dogs that they don’t love Kongs?” I was under the mistaken assumption that *all* dogs love them. Hah! Not so at our house!

Riley loves to play catch with his squeaky tennis balls, but a Kong is something that I wasn’t comfortable tossing for him to catch. The thought of breaking his teeth when catching a hard rubber Kong was just not something I wanted to risk. Getting klunked in the head or an eye with a tennis ball probably won’t do any damage but think about a Kong hitting you in the head or the eye. Now that could hurt! You don’t want to teach your dog that catching a toy is going to cause them pain. That would pretty much be a guarantee that your dog would give up toys real quick.

In my attempt to cure their Kong-boredom, I went looking for ideas for what to put in a Kong. I got a twinkle of interested from them if I filled their Kongs with dry treats. It didn’t take long for Riley to figure out that picking it up and dropping it tended to release the treats pretty quick, so he’d pick it up, drop it, chow down on the numerous treats that would fall out and then chase it around the house a few times doing this. It was a lot of fun to watch and he sure enjoyed it but the treats were gone in a hurry and he’d be looking for more — think fattening way to keep your dog entertained!  It wasn’t long before I noticed he’d Kong-ed his way up a few pounds. Nissa is our puzzle dog, she loves things she has to figure out but with nothing but dry treats in them a Kong was a short-lived activity for our furkids. It was suggested by a friend that I smear peanut butter inside their Kongs. That might work for some but our dogs don’t like peanut butter. Don’t look at me all wide-eyed, it’s true!

Konging as an Art is not as crazy as it may sound. For some dogs there’s a trick to reaching Kong-love level and you may accomplish this by layering the treats inside the Kong when you stuff it. There’s a photo of a Kong sliced open to show the layering effect on the Kong toy website. Layering a Kong keeps a dog’s interest longer because a Kong stuffed with a variety of yummies is like digging for buried treasure. I like to layer really valuable treats with those that aren’t so valuable.

If your dog isn’t fond of peanut butter you might try some liver sausage. IMPORTANT! Read the label on the liver sausage to make sure there is no onion in it of any kind!) Mix some dry treats in a bowl with a small amount of liver sausage — just enough to lightly coat the treats which will also make the treats stick together rather than just falling out of the Kong to easily. Spoon the mixture into the Kong and pack it down a little which raises the level of difficulty for your dog to retrieve the treats a notch. I would take it easy on the sticky stuff. Not only are peanut butter and liver sausage fattening, but liver sausage in particular is very rich and may cause a case of the Hershey Squirts. You may want to restrict where your dog is allowed to enjoy his Kong because both peanut butter and liver sausage are going to leave a greasy residue on your carpet or furniture. Mine are confined to the kitchen for any Kong time containing treats that would stain fabrics.

The idea is to fill the Kong so that whatever is inside is work for your dog to get out. Just dumping in some goodies that easily fall out when the Kong is moved is the wrong way to do it. Make them work for what’s inside! Most dogs love this kind of “work!” It keeps them occupied which helps to prevent boredom.  Properly stuffed Kongs are known to help with separation anxiety issues and other behavior problems. Remember, a bored dog will make his own fun. All to often the kind of fun your dog chooses is destructive and/or makes people think they have a bad dog which in turn gets to way to many dogs a one-way trip to the nearest animal shelter rather than the owner taking the time to deal with issues that are most often curable.

My FAVORITE Way to KONG My Dogs

I’m open to activities that give my furkids interesting things to do that will help with their emotional well-being. My daughter and her sons have a wonderful but very active young Golden Retriever named Toby. Toby is on a dry dog food diet and to help keep him entertained they serve his meals in a Kong or other sturdy rubber-y treat dispenser toy. Toby loves to chase his Kong around and gobble up the kibble as it falls out a piece or two at a time. He has a blast eating his dinner this way and it’s a real hoot to watch him! I don’t think I’ve ever seen a dog have so much fun eating a meal!

One night I dug out a couple of normal sized Kongs and stuffed a few pieces of frozen raw meat chunks (our furkids are on a raw diet) in each one and set these down next to their food dishes when I fed them. It didn’t take them long to find out that their Kongs were no longer “just Kongs” but instead contained buried treasure!

When I saw how well this worked, I promptly ordered two of the really BIG Kongs and several times a week now our furkids get part of their meal served in a Kong (if the whole meal would fit they’d be served a whole meal in a Kong). I make sure to stuff the Kong with boneless portions, I never stuff with bone-in meats. This simple, inexpensive little trick provides them with additional meal-time pleasure. It’s brain-work because they have to figure out how to get the meat chunks out so it’s like a puzzle for them to solve. The bonus for me (besides seeing how content they are to dig their meals out of their Kongs) is that I have happier dogs and because the meat is frozen (they prefer frozen) there’s no mess!  It’s a win-win situation!

I still give treats in the smaller Kongs occasionally but because we have to keep Riley’s weight down (more than I’d like) due to his recent hip surgeries and we don’t want either of them to wind up overweight, I don’t do this very often. I can’t use the small Kongs to keep the amount of treats down because the small ones are a potential choking hazard for bigger dogs. The medium size Kong holds quite a bit when serving treats in them so when I do give them treat-filled Kongs, I cut down on their meal portions for the day and maybe even two days depending on what I’d put in the Kongs I’d served with treats.

Feeding in a Kong MAY SAVE YOUR DOG from BLOAT

One of the contributing factors to bloat is thought to be related to the speed at which a dog eats. Dogs that scarf their food as fast as they can take in a lot of air when they do this which in turn opens the door to bloat. I don’t have any scientific proof but I strongly believe that because feeding in a Kong considerably slows down how fast a dog is able to eat, it can help curb incidents of bloat and we’re all for doing whatever we can to keep killer bloat out of our lives.

Although I’m fairly certain that Kongs are considered one of the safest dog toys available this doesn’t mean they aren’t a potential hazard under some circumstances. Please read the packaging for safety precautions when using Kongs! If you’ve tossed out the packaging or maybe need a refresher course, visit the Kong Company website for more information on Kong safety. Even though for many dogs they’re perhaps nearly indestructible, like any other dog toy Kongs should be used only under supervision.

Make sure to also purchase the proper Kong for your dog. Kongs are sold in a variety of sizes and colors for safety reasons. The white and blue marble-y looking ones are for puppies so they’re not going to be as rugged as the red and black ones which are also larger. You must know your dog and purchase your Kongs accordingly using your dog’s age, size and bite strength as your guide. The black ones are geared for dogs with a stronger bite with the red ones being somewhere in the middle. I noticed that after some use, the medium sized red ones we show more teeth marks than the black ones of the same size. They aren’t punctured but you can see the use on the red ones and you don’t see the use on the black ones.

Kongs can be rinsed well and tossed in the dishwasher. I don’t know how they’d fare on the bottom rack so I put them on the top rack. Once a week or so in the dishwasher with manual washing in between after each use is what I go with on the recommendation of other Kong users.

There’s also a brush you can purchase for washing the inside of the Kong which reminds me of a baby bottle brush. You’d be surprised what you’ll find dried and stuck to the inside of a Kong (better known as “oh YUCK!)” which if left could be a potential health hazard to your dog. Soaking the Kongs in hot soapy water in between dishwasher washings and using the brush to clean the inside works really well.